I saw him first, sitting on the neighbor’s fence with a beakful of goodies.

I didn’t spy her until he fluttered up to feed her as she resolutely hunkered down on their nest.

As I thought about their lives, I could only feel admiration.

Individually speaking, the odds may be against them. 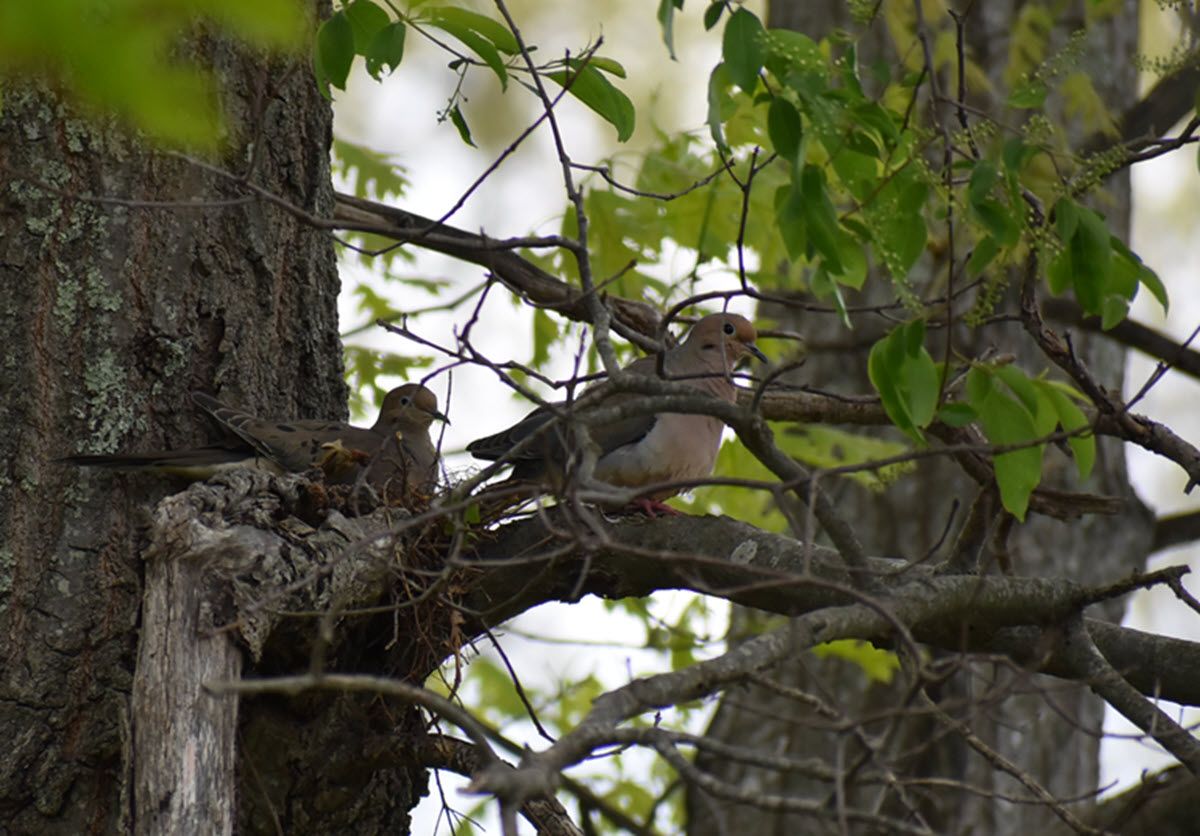 There are squirrels, snakes, blue jays, ravens – any of which would be grateful to fill their bellies with eggs or nestlings.

There are cats. There are hawks that prey on birds. One winter day, we watched a young peregrine falcon pluck and eat another bird from high in one of our oak trees. Small as the meal may be, there are parts of the country where mourning doves may show up on a human’s dining table. In short: The dove parents risk their lives just gathering food.

There’s weather…wind that can knock a nest off its mooring, rain the parents have to use their own bodies to shelter their young from.

There are ticks and mites that suck their very lifeblood from them. Diseases. Lice.

All over, there are wild families working to bring new life into the world…and no matter how busily and skillfully the parents go about caring for their young, some of them aren’t going to make it.

Looking at the doves, though, I don’t think they feel doomed before they start. They just put in the effort, fueled by necessity and what amounts, I think, to a kind of faith. (After all, some will survive, too.) 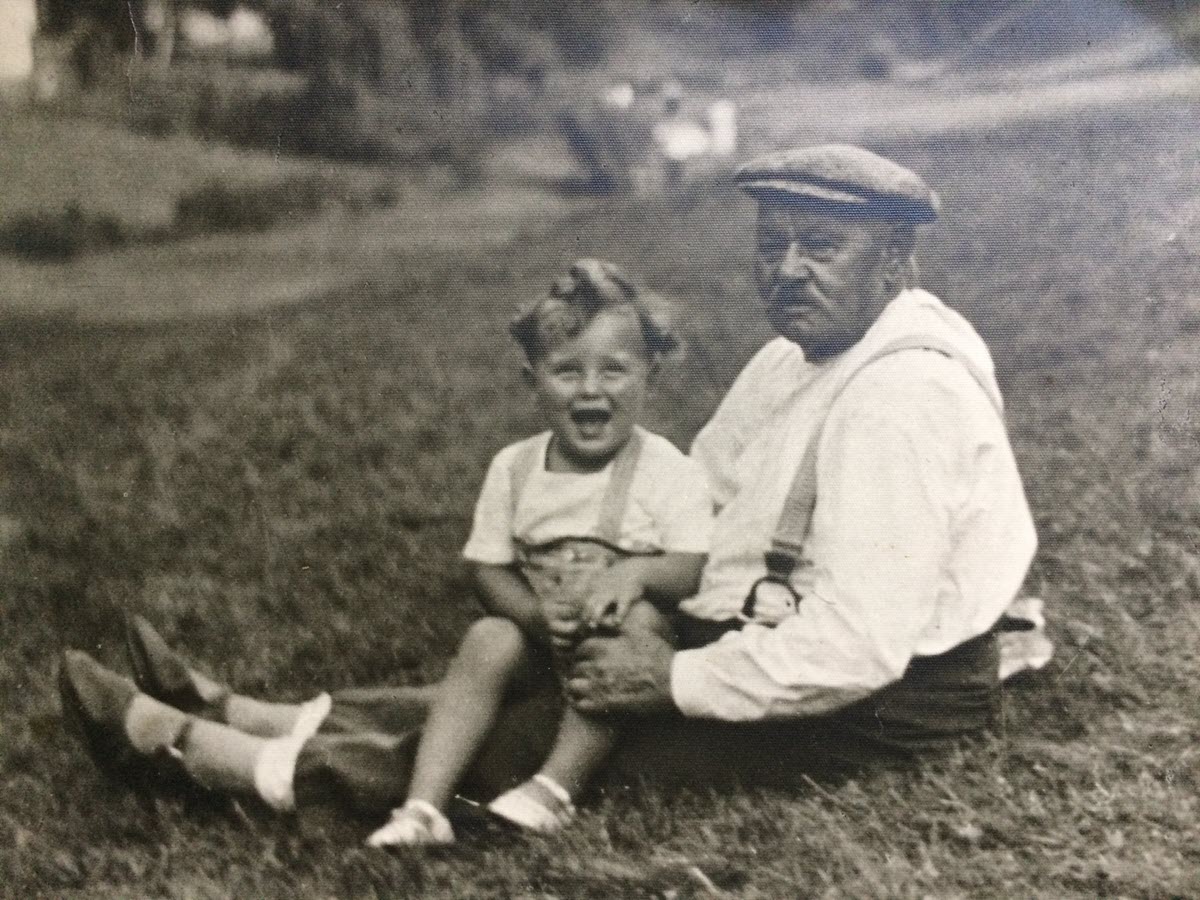 My father’s family is from a village in Bohemia near the Elbe River. Peaceful though the setting looks in photos, they’ve survived annexation, life under a Fascist regime, being on the losing side of a war, Russian occupation, deportation, being refugees, starting over in a war torn country, fleeing Communism for the West (and by necessity, taking only what they’d be expected to take on a vacation so as not to arouse suspicion), and starting over again, for the second time, with only what they could carry. That’s just what happened during my father’s childhood. And that’s just one family’s story. There’s certainly no shortage of suffering in the world.

The child who tried to shoot fish in a pond with a submachine gun left behind by a fleeing army, the child who witnessed a rape and didn’t know until he was an adult what it was he’d seen, the child who somehow grew into a man with a huge capacity for patience and compassion…that’s blood that runs in my veins.

He developed an underlying belief early, I think, that this life wasn’t going to give him what he really wanted and that stability and simple things were enough. He seems to have responded to that with a characteristic good grace that’s partly innate and partly, (perhaps?), was kept lubricated via alcohol. (We’re none of us perfect and we’re living in a far from perfect world.)

I asked him once what he thought the most important quality was when dealing with adversity and he answered, “Resilience.”

I know I met my grandfather, but I was too little to remember. (He died when I was four.) And though I loved my grandmother, we had an ocean and a language barrier between us. But I think of resilience when I think of them. Despite extremely turbulent times, they managed to raise three children, all of whom turned out to be both productive members of society and defined by kindness.

I see resilience in the dove family, perched so precariously, it seems, on the divide between life and death. And yet… they live.

Eleanor Roosevelt said, “A woman is like a tea bag. You never know how strong it is until it’s in hot water.”

I’ve certainly had my difficulties, but when I look at my life in a larger context, it’s been comparatively easy.

Though I wouldn’t have had the words for it at the time, I think I’ve wondered since I’ve been old enough to wonder: What kind of tea am I going to make when the water I’m steeping in gets really hot?

Because I think the belief I formed early on is that hard times – really hard times – are going to come…it’s not a question of if, but when. I smell the smoke on the wind, I hear the thunder from a distance. Sometimes I’ve worked to hone myself for them, sometimes I’ve been distracted, sometimes I’ve tried to avoid. But in one way or another, I think that belief has been the underlying thread informing nearly the whole of my life. It still rings like a clarion call and it speaks not of anxiety, but of urgency:

When it matters, I want to be resilient.

So in a kind of way, every failure can become a learning lab. Every difficulty becomes a sort of test for the bigger test.

Am I seeing things for what they really are? Will I make the right choices in the clinches?

How can I know when I’m in the middle of it?

But I look at the doves. I think of my family. I think of all the survivors and all of the lost in the history of the world. 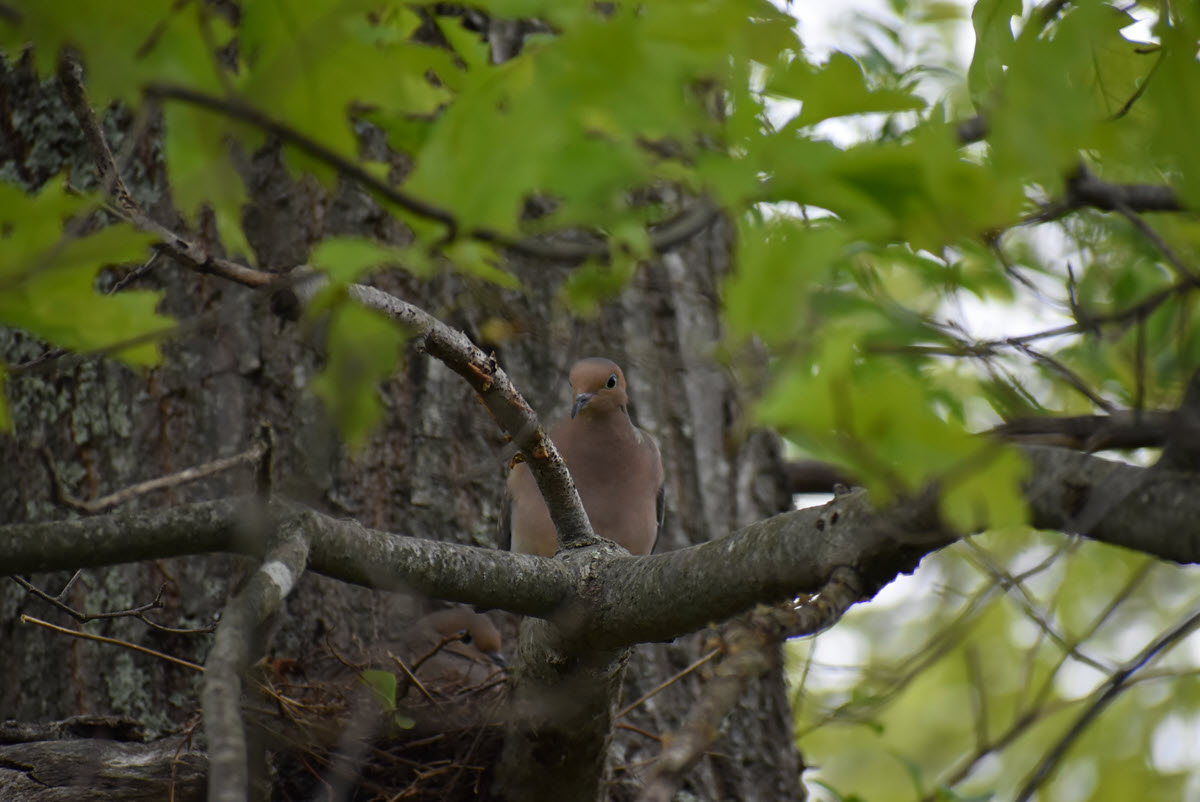 And now, so as to end on a lighter note, my ‘Madame Lemoine’ lilac is blooming for the first time this year and she is, indeed, gorgeously fragrant. And looks very fetching in company with ‘Edward J. Gardner’ and ‘President Lincoln,’ I must say.

I sat outside with Joel today while he had lunch (I’d already eaten) and enjoyed the company and the air infused with the scent of lilac. That’s when I saw Papa Dove, as mentioned at the start of this post. 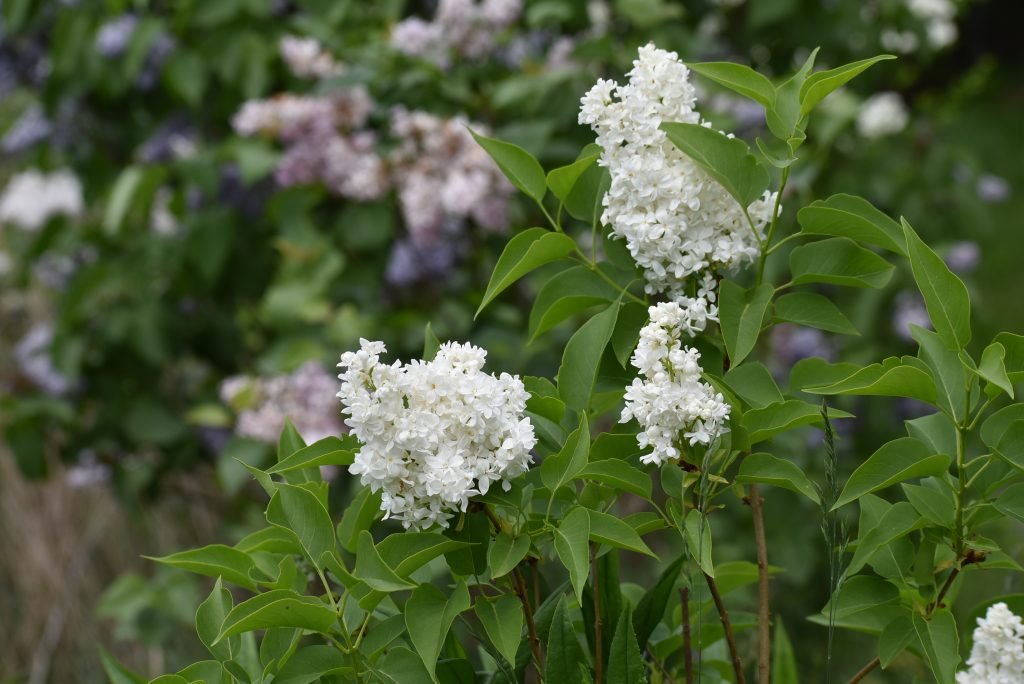