Skip to content
Joy in the Seasons, New Meadow Garden

Resting Up in Winter

It’s been awhile since I’ve written and my plan isn’t to resume posting until the garden starts growing again (most likely sometime in March). But meanwhile, I thought it would be fun to pop in and let you know what’s been happening while I’ve been on break.

The Birds are Singing I often hear the Carolina wrens calling to each other when I’m out taking care of the hens in the morning. I was thrilled when one of them (Mr. Wren?) perched on the deck railing to belt out a song one dripping-wet, foggy morning. And even more thrilled that I had time to run for my camera and get this photo for you.

The chickadees, tufted titmice, and song sparrows are all giving voice, too.

Many (though not all) wild flowers require a period of exposure to cold before they’ll sprout. I bought my seeds for the year last month and divided them up by how many weeks of cold, moist stratification they need to receive.

On a whim, I decided to try a new brand of seed starting medium this year (FoxFarm ‘Ocean Forest’). I’ll let you know if I think I get different results from the usual MiracleGro Organic.

The planted seeds are getting their cold treatment in the cellar bulkhead. There’s an unfinished room in the cellar which stays chilly during the winter, but I think the bulkhead more closely approximates the natural freeze and thaw cycle they’d get if they were outdoors. This is how I keep track of what’s sown where: 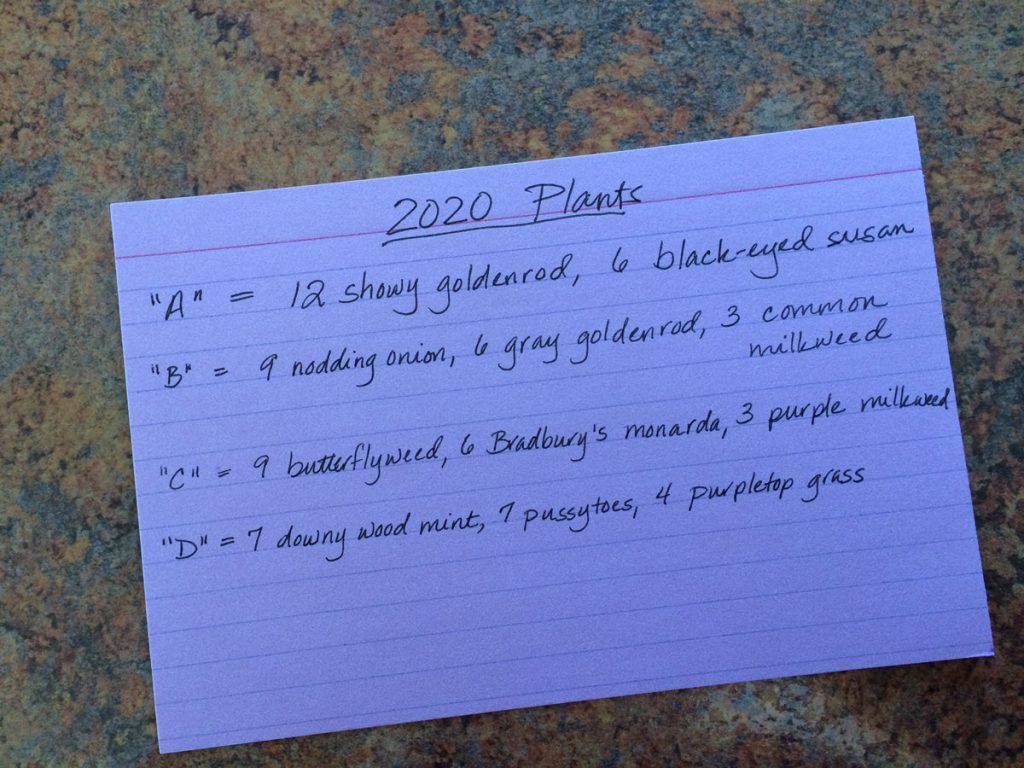 You’ll notice I’m growing some species beyond what I planned for the new garden bed. Partly, this is because of an interesting webinar I attended last November about diversifying your lawn (nodding onion, pussytoes). And partly, this is because plants become irresistible as you start reading about them and looking at pictures (gray goldenrod, Bradbury’s monarda, downy wood mint, purpletop grass).

In a week or so, I’ll plant another batch, which will only need a 30-day period of cold stratification to prepare them for germination.

Lily Got a New Bed

Doesn’t she look happy? She adores it.

It’s always tricky buying something for cats because you can never be sure whether they’ll really ‘take’ to it. Sometimes they turn up their noses at something you buy in favor of something like a cardboard box, you know?

The two things I’ve gotten for them over the years which were instant and lasting hits were the calming pet bed from Pawsome Couture (above) and the #10 cat tree from ArubaCat.

As for Julian Fergus, his new favorite spot is in the corner of my office, luxuriating in the waves of warmth that emanate from the space heater.

When he gets really cozy, he flips over onto his back, for all the world like a sea otter happily nestled in a bed of kelp. He looks so funny, his paws folded back neatly and his little, quizzical, bewhiskered face turned up like a sunflower. Always makes me smile.

I found a source where I could buy vanilla beans in (comparative) bulk and decided to try my hand at all things vanilla.

So now I have vanilla extract, vanilla sugar (a necessary ingredient for making Oma’s Plum Cake during that brief period when the little, blue Italian plums are in season) and something called “Velvety Vanilla Bath Oil” in process.

Eventually it washed away, but I enjoyed a couple of hours of vanilla redolence on my fingertips the day I split, scraped, and chopped a whole bunch of the beans. Vanilla must be one of the most gorgeous scents in the world.

The fruits of my labor should be ready to sample just about the time the seeds come out of cold storage.

Until then, I spend a minute or so while the coffee brews each morning shaking up various containers of rum, sugar, and soybean oil, all in the process of being infused with vanilla flavor and/or fragrance.

Besides the above, I’ve read a few good books, laughed over British oldies but goodies like Keeping Up Appearances and As Time Goes By (I love Lionel), learned about the care and feeding of neonatal, orphaned kittens (because it sounded interesting and you just never know), and joined the cats in watching the robins pick the hawthorn tree almost completely clean (Herbert seems to have been an anomaly; he disappeared one day last year and I’ve never since seen another robin like him).

Thanks to a pretty ceramic diffuser I found last year (no noise, no electricity) and a mixture of bergamot, lavender, geranium, lemon, and frankincense essential oils, my office smells like a delicious lemon drop candy while I work away at my day job.

Scent-ually speaking, I think I’ll work in a balsam fir forest next.

My husband and I watched a red fox trot through the yard (ever so nonchalantly past the chicken run, mind you) and down the hill one afternoon. Hmmm.

No bluebirds so far this winter, but I have my fingers crossed and cornmeal-and-peanut-butter crumbles at the ready. I’ll write again in a few weeks, if not before, but meanwhile, I’d love to hear from you!

What are your favorite ways to rest and relax in winter?

One Reply to “Resting Up in Winter”