The Great Escape of Julian Fergus

in early June, Julian Fergus got out of the house and seemingly disappeared into thin air for several hours.

We’d lost a couple of cats (funny, feisty Little Joe and my fluffy and beloved Dear Little Kitty) to coyotes in the past. And we knew that Julian had lost his first family somehow and spent an indeterminate amount of time surviving the streets of a once-thriving mill town, still good-sized city. He’d proved himself as street-smart, but not necessarily woods- and field-smart.

When you adopt an animal, you take responsibility for its well-being. Not knowing where he was or what animal he might tangle with, you can imagine the weight of our hearts as the hours ticked by.

We worked in the garden so we’d be there if he showed up, combed the yard, double-checked his microchip registration, talked with the neighbors.

We rode waves of fear and hope. 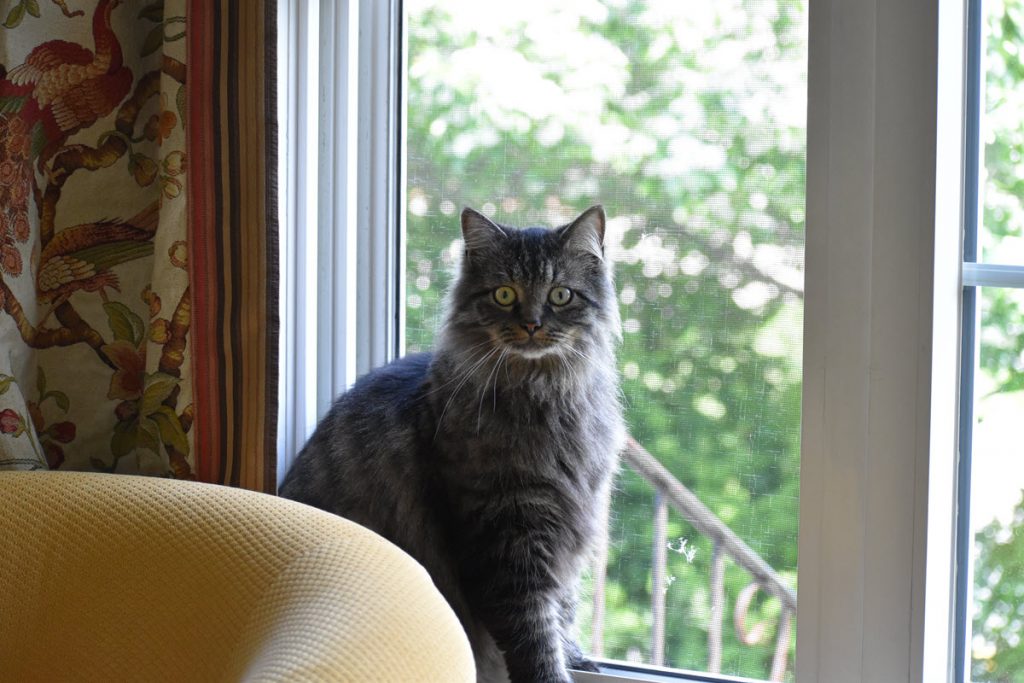 The good news is that he did show up at the door, mewing, in the wee hours of the morning.

But while he was missing, I did some Googling for tips to find a lost cat. A couple of the resources I found were quite interesting and helpful, so I wanted to share them with you. (Though hopefully they’ll never be needed, it’s never amiss to know “what to do if . . . “)

PawBoost has a great blog post called 7 Effective Search Tips for Finding Your Lost Cat, which you can find here.

I don’t know where Julian went while he was gone. With his coloration, he would have blended right into our little woodland if he’d settled in there. But we couldn’t assume that he’d stayed in our yard.

Knowing that, one of the tips I appreciated from PawBoost’s post was to use the power of scent to help a lost cat find its way home.

Crazy as it is to my sensibilities, Lily and Julian both just love curling up with smelly shoes. So I tied a pair of workout shoes to a shepherd’s crook in the garden where the breeze could waft the, ahem, fragrance near and far.

And I crumbled some clumps of used kitty litter up and created a couple of “breadcrumb trails” back to the house.

Did scent make a difference to the outcome? Only Julian can tell us for sure – and his lips are sealed on the subject.

But while I was waiting, the Happy Tails on PawBoost’s site – stories of pet parents reunited with lost pets – added a welcome weight to the “hope” side of the scale.

I’m kind of a sucker for personality theory.

Facebook app’s quiz about what kind of cat I’d be if I was a cat? Norwegian Forest.

So when Google turned up How Personality Clues Help Find Lost Cats, you know I had to read it.

This turned out to be quite interesting. It detailed four typical ways that an indoor-only cat will respond if it gets outside.

Julian best fits the “Cautious Cat” personality, which was rather comforting, because this isn’t a cat that’s likely to travel very far, at least initially.

It was also intriguing to read a case solved by a real-life lost-pet detective, a line of work I’d never even known existed.

We shared what had happened with the vet the next time Julian had an exam. At the vet’s suggestion, we decided to see how he responded to a harness and leash.

Given the pleasure many find in being outside, the question of keeping cats indoors only versus indoor/outdoor is a thorny one. There are a lot of angles and I have to admit, we’re somewhat conflicted ourselves. Maybe that’s a subject for a future post.

But meanwhile, the vet’s suggestion seemed like a decent compromise. It keeps the cat safe from many of the hazards of outdoors, while protecting the little wildlings we’ve invited here from his instinct to hunt.

What do you think Julian Fergus thinks of his getup? 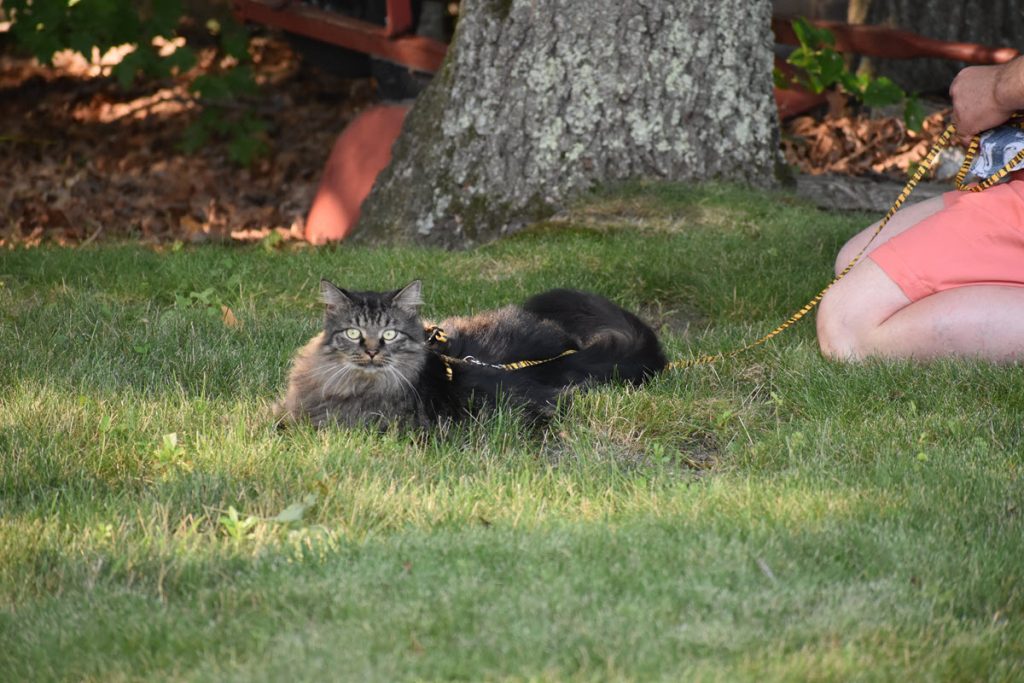 Have you ever lost a pet before? Please share any stories, tips, and resources in the comments!