An Unexpected Asset in the Hummingbird Garden

If you enjoy watching birds in your garden, you probably already know about hummingbirds’ preference for red or orange, tubular-shaped flowers. (Trumpet honeysuckle is the big nectar draw in my yard, flowering May through October.)

Maybe you even keep a hummingbird feeder stocked with sugar water for your feathered friends who eat about half their weight in sugar each day.

But that’s not all they eat! Like any other animal, they need a source of protein in their diet. And where do they get it? From small insects . . . up to hundreds of them each day.

Of Ruby-throated Hummingbirds, the only species where I live, the Cornell Lab of Ornithology says that, “Hummingbirds…catch insects in midair or pull them out of spider webs. Main insect prey includes mosquitoes, gnats, fruit flies, and small bees; also eat spiders. [They] sometimes take insects attracted to sap wells or pick small caterpillars and aphids from leaves.”

But all hummingbirds make insects a part of their diets.

So, what is the champion in my garden at drawing in a cloud (I mean that quite literally) of tiny, flying insects, just right to nourish jewel-toned avian aerobats and their hatchlings?

Get ready for a surprise, because it’s a shrub with neither red, orange, nor tubular-shaped flowers. Instead, it’s this lovely little flowering shrub: New Jersey Tea. 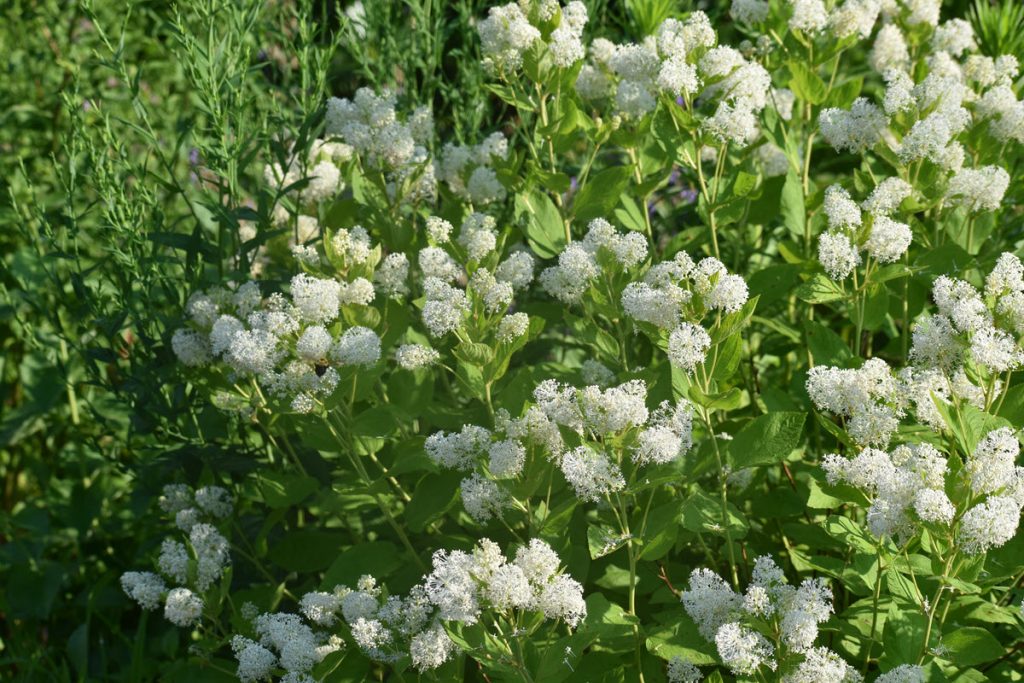 Despite its state-specific name, New Jersey Tea (Ceanothus americanus) is native to just about the entire eastern half of the United States. And not only does it turn into a frothy confection of creamy goodness when it flowers, but it’s a great shrub for difficult locations.

Got a spot with nutrient-poor, sandy or gravelly soil in a sun-baked spot? New Jersey Tea is up to the task! (Just make sure you water it while it’s getting established.)

Another plus is that it fits nicely in cramped quarters, maturing at about three feet tall and wide.

So, if you have a small, single-story house like mine, this might be one to consider including in your foundation planting. Just don’t site it with a northern exposure – it’ll grow fine in partial shade, but it needs a few hours in direct sunlight each day to do its best.

In the right growing conditions, this might also be a nice shrub to include in a mixed planting around a patio. (That’s if you like some sense of enclosure to feel cozy and comfortable. I do.)

In this case, you obviously want to retain an easy way onto and off of the patio. And stick with plants that are on the shorter side, so you don’t end up feeling claustrophobic. ❤️

So as not to make this post too long, I’ll follow up with a second one with several possible planting companions. Stay tuned for that! (UPDATE: You can find that here.)

Meanwhile, if you’re wondering how New Jersey Tea got its name, wonder no more. This is probably the most famous of the plants revolutionary-age colonists used to make “Liberty Tea.”

According to Stalking the Wild Asparagus by Euell Gibbons (you can still find copies in used bookstores), you want to gather the leaves while the plant is in bloom. He says of it, “It contains no caffeine nor theine and therefore is not a stimulant, but it is a nice-tasting beverage which can be used over a long period of time without one’s growing tired of it.”

I’d be curious to try it combined with Wild Bergamot, another of the “Liberty Tea” plants. A possible approximation of Earl Gray Tea? Hmmm… My New Jersey Tea has finished blooming for the season, but maybe next year. 😊