A Buffet for Black Swallowtail Butterflies

Ever had pretty, black-and-green striped caterpillars with yellow polka-dots show up on the parsley you’re growing for the table? I did last year.

To be honest, I really didn’t mind too much. It was pretty interesting to watch them develop. And I was happy to support the next generation of black swallowtail butterflies in my garden.

Still, it’s nice when what you grow for the table actually makes it to your table! 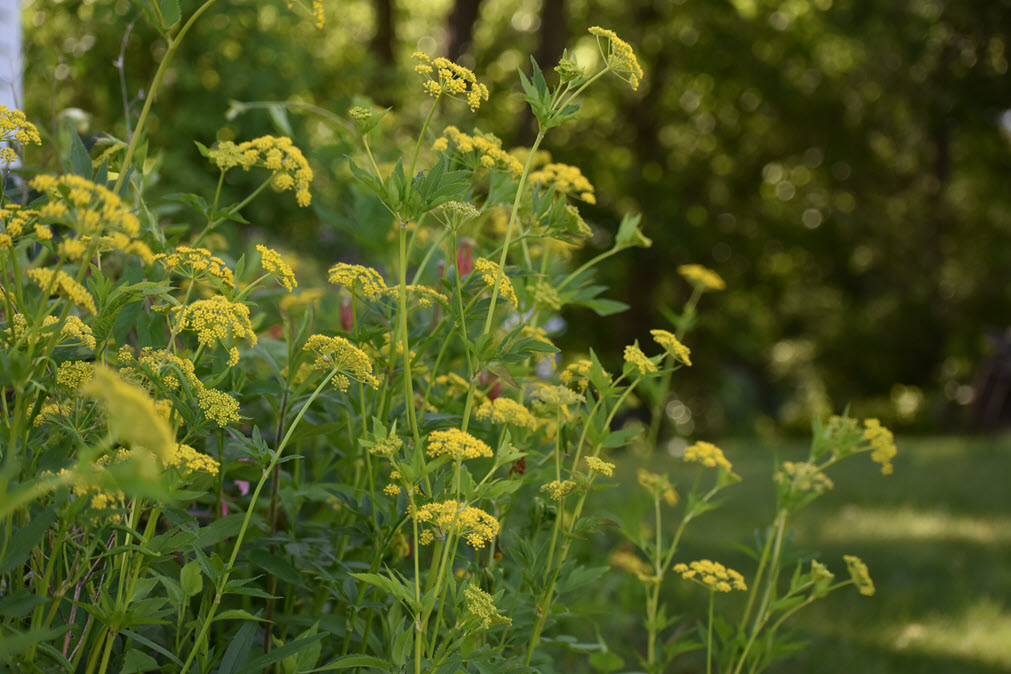 To help keep everybody happy, why not add a stand of golden alexanders (Zizia aurea or Zizia aptera) to your garden? What can you look forward to if you do that?

Golden alexanders do need consistent moisture to perform their best. How did I achieve that on my sandy, dry hillside?

First, they’re planted where they get sun through most of the morning, but are shielded from the more intense midday and afternoon rays. Second, they’re in a section of the garden that’s been well-enriched with compost. (Compost helps to moderate soil moisture whether you’ve got a fast- or slow-draining soil.)

The plants grow between two and three feet tall and are especially pretty massed together. A good-sized drift could be lovely surrounding a small tree or a bush in the garden.

Their bloom coincides with the delicate-looking but tough-as-nails red-and-yellow columbine (Aquilegia canadensis) that’s native to much of the eastern half of the U.S. The two are quite pretty together, to my eye.

In my yard, golden alexanders’ bloom time also overlaps the divinely-scented roseshell azalea (Rhododendron prinophyllum) for a week or two. Pink and yellow positioned cheek-by-jowl together may not be everyone’s cup of tea, but I like it.

Woodland phlox used to add an element of blue-purple to the azalea and Zizia combination, which I liked. Unfortunately, over the years, the phlox was gradually out-competed. (This is useful to know ahead of time if you, like me, prefer minimal maintenance and refereeing.)

Heart-leaf asters put on a soft-purple show in the garden come fall. They seem to grow well with the golden alexanders, neither one being a stronger grower than the other.

So are you iron-clad guaranteed no caterpillars on your parsley if you grow golden alexanders? Not necessarily. But with the native host plant in your garden, you have a place to move baby ‘pillars to the moment you see them, thus preserving the parsley for yourself.

I hope what I’ve shared gets you interested in a garden-worthy plant that adds season-long beauty and interest while attracting pretty, fluttering butterflies at the same time.

Where in your garden might you include golden alexanders?