Amusement, Delight, and Exasperation in the Garden

I’ve written before about my philosophy of designing for both human and wildlife habitat when gardening. Though most of my gardens are still years away from maturity, they’re already providing both. What do you have to look forward to when you garden this way?

Here are a couple of the attractions I’m currently enjoying. 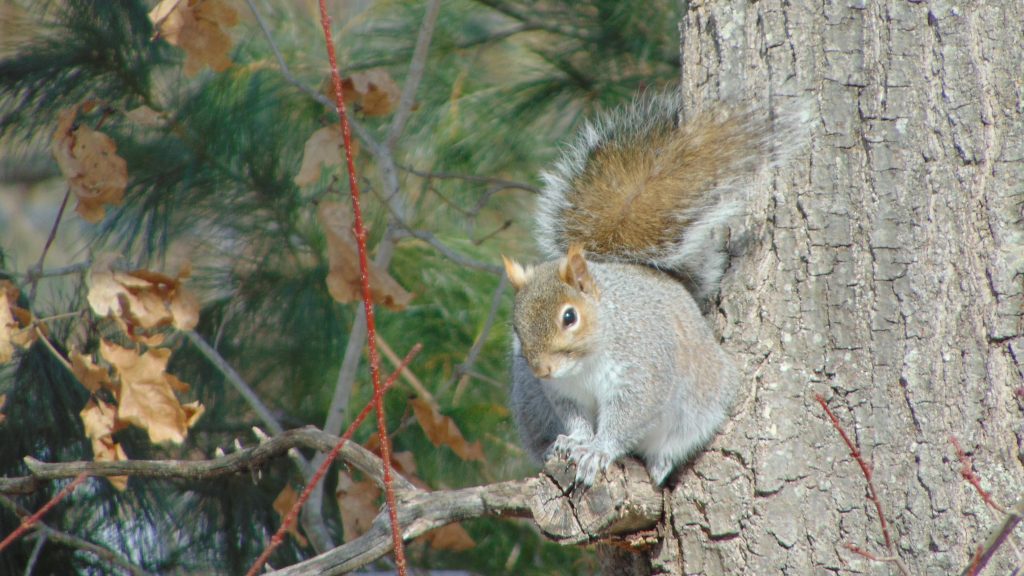 The other morning, while the coffee was brewing, my eye was caught by a scurry (or group) of squirrels chasing each other all around the oak grove.

Sometime in January, we always see a couple of squirrels chasing each other. This is just part of their mating ritual – he chases her until she catches him. But this was something new.

For one thing, there were four of them. For another, they were chasing each other with a kind of playful abandon I’d not seen before.

Up, down, and around trees, over ground and through the canopy went the chase. They ran to the very tips of branches before leaping through the air to the next tree. (A few times, I wasn’t sure they were going to make it, but no one came to harm.)

If one paused, another would catch up and nip the laggard, getting the whole race started again.

It was only when there was a pause in the game that I finally figured out what was going on.

One of the squirrels had bounded on its own to the edge of woods and lawn, where a patch of goldenrod grows. He was attempting to climb a goldenrod stalk (in itself, unusual behavior). The goldenrod, of course, bent under his weight and deposited him spine-first on the ground.

There he lay for a moment or two, considering.

Next second, he’d twisted upright and undertaken an impressive series of vertical leaps, looking for all the world as if he’d been shod with springs.

It appeared that he simply had far too much energy for any one body to contain.

That’s when it hit me. These squirrels were different because I wasn’t watching adults, I was watching kits!

And like babies everywhere, they were all about play.

They’ve been bringing laughter and delight to my mornings for about a week now.

The other character who’s been playing a starring role just lately is a male robin I’ve named Herbert. (Why Herbert? Check out what it means!) 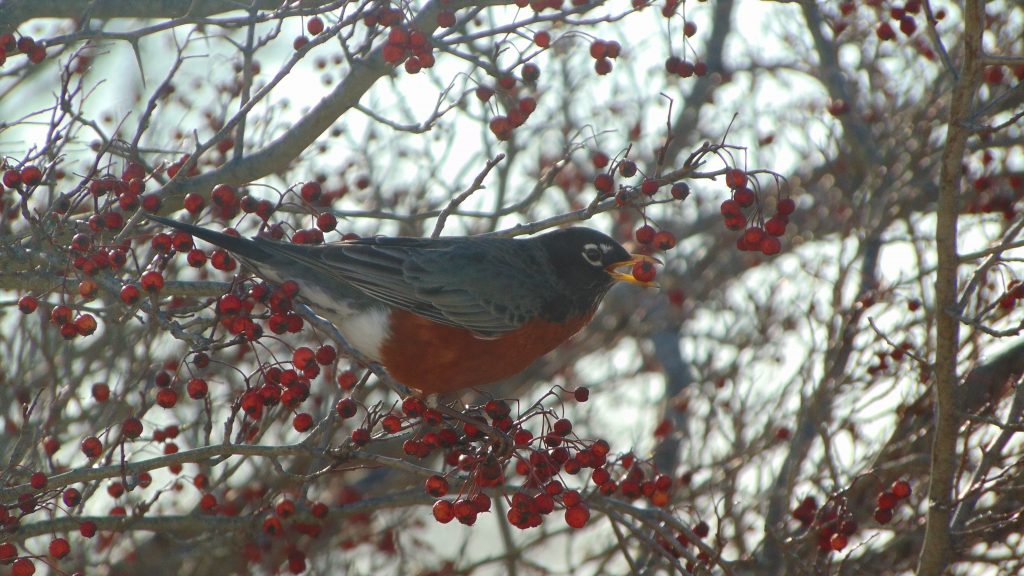 Most Januarys, flocks of robins and cedar waxwings descend on the hawthorn tree in the front garden and strip it bare of berries in short order. This winter was different.

Unlike most robins, who spend their winters flocking together in convivial companionship, Herbert flies alone. And having spotted the hawthorn tree, it seemed that it simply had to be his.

From his solitary post, he guards his larder tirelessly against would-be berry thieves.

You know that old saying that’s sometimes used metaphorically: It’s not the size of the dog that matters, it’s the size of the fight in the dog? Well, it apparently holds true for birds.

Though I’ve not succeeded in videoing it, I’ve twice observed Herbert chasing off entire flocks of intruders. Once it was starlings; the second time, it was other robins.

Though only time will tell, I’m hoping that in the fullness of time, he’ll allow a lady robin into his sanctuary. That hawthorn looks like a mighty fine spot for a nest (says the girl who’s hoping for a view from her office window of a robin family being raised).

Now, are either robins or gray squirrels uncommon? No. But that’s not the point.

The point is that when you create an inviting spot for life to make a home, you’re setting the stage for all kinds of delightful observations. You’ll get to know “your” animal friends and you’ll find that they have their own personalities and funny little quirks, just like we do.

They’ll give you moments of hilarity and moments of wonder – and sometimes exasperation, too. (Don’t talk to me about the time Stinky the Skunk dug up a bunch of newly planted seedlings for reasons best known to himself!)

Morning coffee will never be the same.

What gives you joy in your garden now?
What joy-creating elements to do you want to add or attract to your garden in the future?